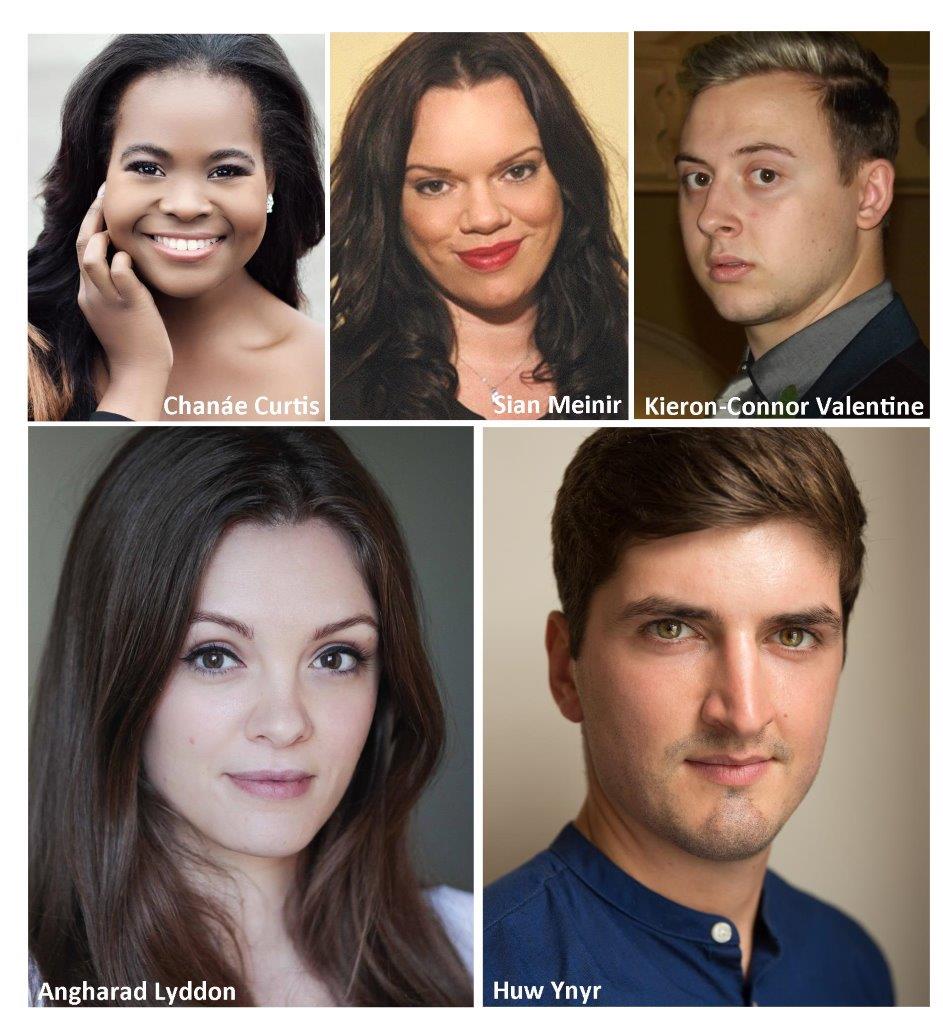 Chanáe Curtis
American soprano Chanáe Curtis studied at Ashland University, Ohio and completed her Master's degree at the Manhattan School of Music, New York City. In 2016, she graduated from the M.A Opera Course at the Royal Welsh College of Music and Drama, Cardiff, where she was taught and continues to work with Suzanne Murphy.

Engagements this season include a recital at St-Martin-in-the-Fields on 14 October and the Te Deum from Verdi's Four Sacred Pieces with the Halle Orchestra, conducted by Sir Mark Elder on 16 November, which will be broadcast live on BBC Radio 3.

Meinir Wyn Roberts
Welsh Soprano Meinir Wyn Roberts graduated from the Royal Northern College of Music, Manchester with a First Class B.Mus (Hons) Degree. She subsequently completed her M.A Degree at the Royal Academy of Music, London and is currently on their Opera Course, under the tutelage of Lillian Watson and Jonathan Papp.

Sian Meinir
Welsh mezzo-soprano Sian Meinir has over 20 years' performing experience with some of the UK's foremost opera companies. Her striking contralto timbre allows her an extensive repertoire ranging from Verdi and Wagner to Janacek and Schoenberg.

Roles for Welsh National Opera includeIseult of the White Hands in Le Vin Herbe, Enrichetta in I Puritani andMargaret in Wozzeck. This season, Sian will be performing the roles of Dr. Heinkel/Alfana/ Old Woman of Bala in the world premiere of Opra Cymru's Wythnos yng Nghymru Fydd.

Angharad Lyddon
Mezzo-Soprano Angharad Lyddon made her professional debut for English National Opera in 2015 as Kate in The Pirates of Penzance and performed the role again in their 2017 revival. She has also covered Perdita in The Winter's Tale and Schoolboy, Dresser and Waiter in Lulu for ENO.

She created the role of Panthea in Luke Styles' opera Wakening Shadow whilst a Jerwood Young Artist at Glyndebourne in 2013 and has performed Olga in Eugene Onegin for Opra Cymru, Cherubino in The Marriage of Figaro for Clonter Opera and Julia Bertram in Mansfield Park for The Grange Festival.

Kieron-Connor Valentine
Welsh counter-tenor Kieron-Connor Valentine is currently studying at the Royal Northern College of Music, Manchester on the B.Mus Vocal Studies course. While at the college, his roles have included L'humana fragilita in Il ritorno d'Ulisse in patri, Oberon in A Midsummer Night's Dream and Didymus in Theodora.

2018 sees Kieron-Connor join the Britten-Pears Programme at Aldeburgh Festival in the roles of Didymus in Theodora and Tolomeo in Julius Caesar with Bury Court Opera.

Huw Ynyr
Welsh tenor, Huw Ynyr graduated with distinction from the M.MUS Performance Course at the University of Wales, Bangor in 2015. He has already performed in concert with Sir Bryn Terfel, former Royal Harpists, Hannah Stone and Rhianwen Pugh and is a popular soloist in concert and oratorio works with choral societies across the country.

This season, he continues his vocal studies on the M.A Opera Performance course at the Royal Welsh College of Music and Drama, Cardiff, under the tutelage of Adrian Thompson.