Coming to a Theatre Near You.. 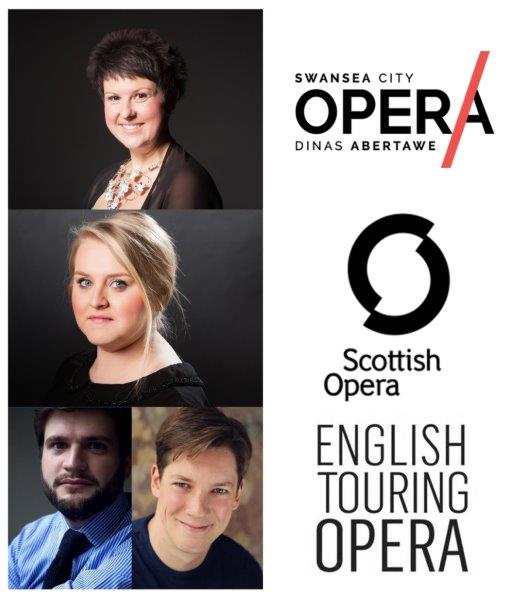 Our singers are busy at work as preparations are under way for the Opera Spring Season.

Soprano Angharad Morgan will be making her debut in her first main operatic role as Marguerite in Swansea City’s touring production of Gounod's Faust this spring.

To celebrate their 10th Anniversary, Swansea City Opera are staging, the nowadays rarely performed opera, Faust by Charles-Francois Gounod. In this production, Welsh Soprano Angharad Morgan will make her first major role debut as the beautiful & innocent Marguerite – the object of Faust’s attentions.

“It's always so exciting to be singing a role for the first time, and even more so that it's a debut of such a fantastic role. Marguerite has so much depth as a character and it's certainly challenging as a singer to approach something with such strong dramatic purpose. The music is challenging enough in itself! It's been a while since I have had something so dramatic to get my teeth into, and this is certainly that.The rehearsal process is great fun, it always takes so long to learn a role so when you get the opportunity to sing it with the rest of the cast and then put your own stamp on the character it's really inspiring. I just can't wait to get onstage now and hit the road!”

This production of Faust is double-cast, but Angharad’s beautiful lyric soprano and rendition of Marguerite can be heard on the following dates:-

It may be winter, but Scottish Opera’s operatic garden party is sure to warm you up!

This year’s programme includes favourites from Verdi’s La Traviata, Bizet’s Carmen and Mozart’s The Magic Flute, as well as lesser-known works by Francesco Cilea and Hamish MacCunn. Add in a smattering of operetta and Viennese waltzes, plus a world premiere from Scottish Opera’s Composer in Residence, Lliam Paterson, and you’ve got a night not to be missed.

Further information regarding the performances is available here:-

Two Harlequin baritones will be engaged in English Touring Opera’s upcoming spring season. Jan Capinski and Gareth Brynmor John will take to the stage for a brand new commission for primary schools and families, Shackleton’s Cat by composer Russell Hepplewhite, who also wrote ETO’s hit children’s opera, Laika the Spacedog. The opera marks the 100th anniversary of Ernest Shackleton’s voyage to Antarctica a century ago. Gareth Brynmor John performs the role of Shackleton whilst Jan Capinski multi-tasks in the roles of Worsley, Tom and McIlroy. Both singers will also be involved with the season’s other productions, including two works by Donizetti - The Siege of Calais and Il furioso all'isola di San Domingo(The Wild Man of the West Indies)which is based on an episode in Cervantes’ Don Quixote. Puccini’s ever popular La Boheme will complete the season. Jan Capinski will perform the role of Armando in The Siege of Calais and Gareth Brynmor John will understudy the role of Marcello in La Boheme.

Shackleton’s Cat will be performed in Primary Schools across the UK, but performances on the following dates will be open to the public:-